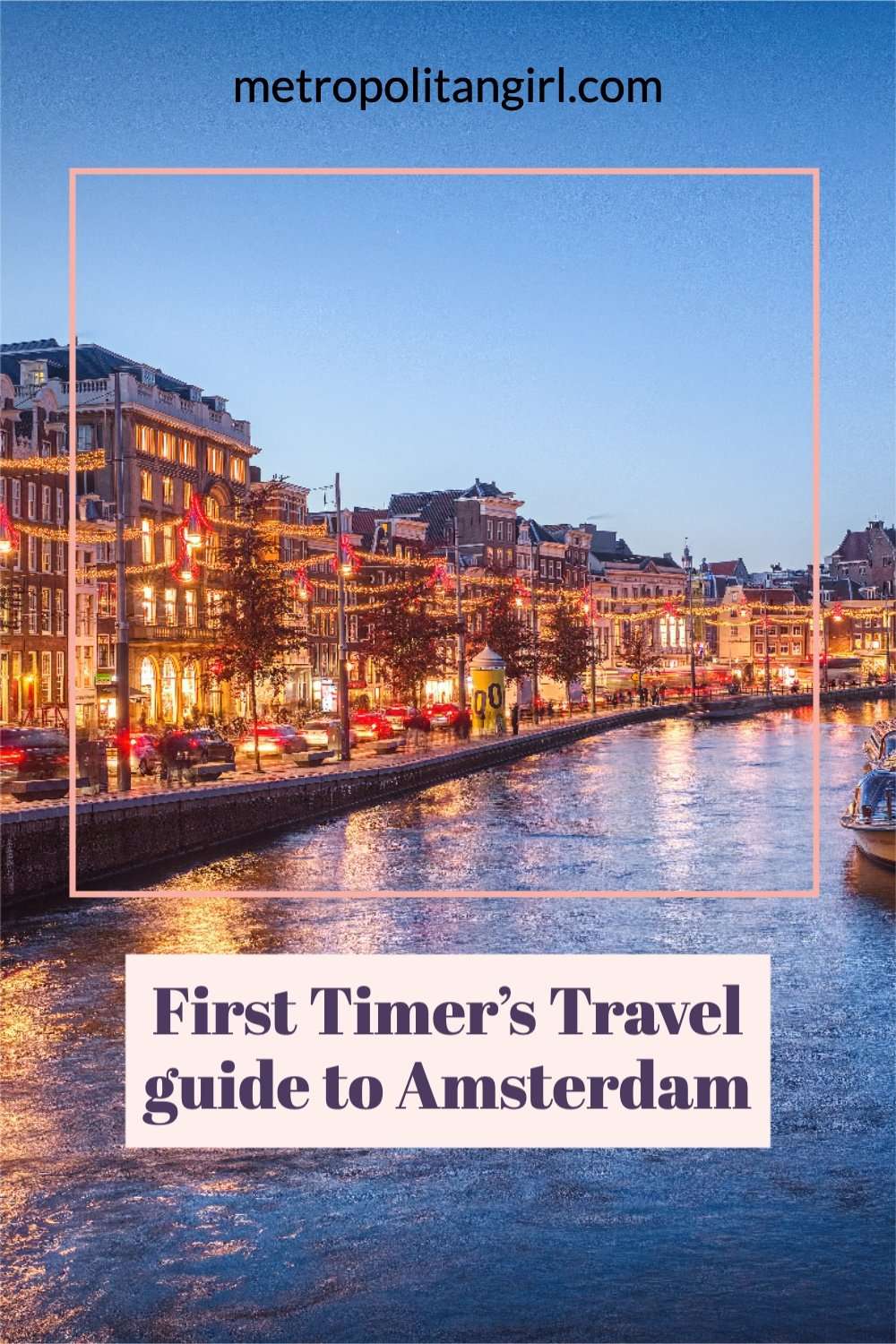 Looking for a 2022 updated travel guide to Amsterdam? This guide includes travel tips, best places to stay & things to do while you visit. The netherlands is one of the top destinations to visit in Europe and it’s becoming increasingly popular. It’s the perfect add-on to any trip to Europe or as a solo vacation. This ultimate travel guide covers everything that you need to know about Amsterdam to get you started with your planning.

Amsterdam is the capital of the Netherlands and is known as the ‘Venice of the North’ thanks to its many canals. The city is full of culture and history, making it a must-visit for anyone who loves to learn a little something about every country they visit. Amsterdam is famous for its nightlife and festivals, as well as its artistic heritage.

It’s the homeplace of Van Gogh, and is one of Europe’s most visited cities. The city is characterised by its love of cycling. You’re more likely to find someone travelling around on their bike instead of a car. Amsterdam is like something from a fairy-tale and it’s the perfect European getaway for a few days or as an add-on to another city break.

When Is The Best Time To Visit Amsterdam?

Deciding when to visit Amsterdam will usually depend on your budget and tolerance of crowds. If you want to catch the tulip fields when they bloom, you should visit in April. Amsterdam also celebrates King Willem-Alexander’s birthday on the 27th April by dressing up in orange. You can enjoy this unique tradition if you happen to be visiting around that time.

For those who want to enjoy nice weather without being surrounded by tourist, then September and October are a great time for you to visit. If you’re not used to temperamental European weather, then it’s best to avoid Amsterdam between the months of December and February. The weather starts to approve with the first sign of spring in March.

How To Get to Amsterdam

If you can fly directly to Amsterdam, you’ll arrive at their Schiphol airport, of which KLM is the main airline. The airport is half an hour away from the city and you can jump on a train directly from the airport. The train station is just underneath the airport and offers stops to three of the main stations in Amsterdam. You can pick up a ticket at the airport before catching your train.

Amsterdam is famous for its reliable public transport. They have everything form metros to trams and ferries. I would highly recommend that you purchase a I Amsterdam City Card when you arrive. The card gives you unlimited use of public transport for either 24, 48 or 72 hours. While this ticket might appear on the expensive side, it includes access to over 70 museums, as well as bicycle rentals.

The Best Places to Stay in Amsterdam

Amsterdam is one city where the Airbnb prices are similar to that of the hotels. I would recommend staying at a hotel so that you can take advantage of the added amenities. If you’re a budget, then you might be able to find a private room at an affordable price but expect to pay top dollar for a private apartment. I have five recommendations of hotels to start your search for the perfect place to stay.

This hotel is perfect if you want to be walking distance from spots like the Van Gogh Museum. It’s located in the city centre and near to the Royal Palace. You’re also just minutes away from two metro stops for easy transportation routes. The Marriott has an on-site restaurant, 24-hour room service and all the rooms come soundproofed. If you’re travelling with children, then this is the perfect spot for you.

The Catalonia hotel sits at the heart of the Museum Quarter neighbourhood. You will be right in the City Centre. You can explore most of central Amsterdam on foot when you stay at this hotel. It’s just a 13-minute drive from the airport. This is a small hotel with 86 rooms, each of which comes with free Wifi, flat-screen TVs and minibars. You can enjoy a buffet breakfast at this hotel for an additional fee.

Sebastian’s is located in the city centre right next to the river. You can walk to either the Royal Palace or the Anne Frank House. There’s an array of restaurants at your doorstep that you can enjoy, which makes this hotel the perfect base for anyone who wants to travel around by foot or bike. Sebastian’s is a sustainable hotel with a green policy that puts the environment at its focus.

If you want a hotel on the waterfront, then the DoubleTree is a great choice. You’re within walking distance to some of the main attractions, including the Van Gogh Museum. This hotel is just a few minutes walking distance away from the Central Metro Station, making it easy to get around the city. The DoubleTree offers two restaurants, two bars and a coffee shop,

The Hotel Mercier is located in one of the main shopping areas in Amsterdam. You’re also close enough to walk to Madame Tussauds and the Royal Palace. This is a small boutique hotel with less than 50 rooms. Hotel Mercier is an ideal modern hotel for anyone who wants to enjoy a comfortable hotel room in the centre of the city with great transport links.

The Best Places to Eat in Amsterdam

When you’re in Amsterdam, you have to sample some of the amazing Dutch food. The stroopwafel is perhaps their most famous sweet, which you can find at any bakery or street market. You’ll also want to try dutch pancakes, which are more like a crepe than an American pancake You can find these with toppings including fruit, chocolates and syrups. One novelty food that you’ll find is the Croquettes that you can purchase directly from a vending machine.  If you’re looking to bring some Dutch cuisine home, then make sure to pick up a few blocks of cheese.

The good news is that you’re spoilt for choice in Amsterdam. There are cafes and restaurants on every street, and you could never get through them all. You’ll fall in love with the terrace bars that sit at the side of the canals. If you’re a vegan or vegetarian, then you’ll have no issue with finding food in Amsterdam. The city is always ahead of the curve and has several amazing vegan restaurants for you to try.

There are sixteen Michelin star restaurants in Amsterdam. If you want an affordable option then visit Ron Gastrobar, which is famous for its international cuisine. Their main courses start from just 15 euros, making it one of the most budget-friendly Michelin star restaurants in the world. On the other end of the spectrum, we have the Restaurant De Vrienden van Jacob. This restaurant is on a country estate and serves only 40 guests at a time. You can expect to find French food with a Mediterranean twist.

If you’re a more casual eater, then you’ll love all the culinary festivals and events that are held in Amsterdam. You can experience everything from their coffee festival to the Chocoa Chocolade Festival, and the four-day Taste of Amsterdam festival. If you’re a foodie and looking to visit Amsterdam, then you definitely want to travel there during one of these festivals.

Amsterdam has an amazing selection of rooftop bars that are the perfect spot to people watch. Canvas gives you a 360-degree view of the Amstel River and the city centre. You can enough a full lunch or dinner while watching the world go by. If you want to say one last goodbye to Amsterdam before you leave, then call into the Doubletree by Hilton. Their SkyLounge is right next to the Central Station in the heart of the city. You can watch the sun set and bid farewell to the beautiful city below.

Best things to do in Amsterdam

Before we jump into the top tourist attractions in Amsterdam, I want to remind you about the I Amsterdam city card . It includes all your public transportation and the majority of the most popular attractions in the city. If you buy this card at the start of your trip, you’ll end up saving money and you’ll be able to skip the line at attractions.

The 9 Streets are the centre of the shopping district in Amsterdam. You’ll find independent boutiques, little cafes and art galleries. The 9 Streets are just behind the Royal Palace and is the perfect place to visit for your Amsterdam souvenirs.

If there’s only one thing you can do in Amsterdam it should be to rent a bicycle. There is nowhere that is more friendly for cyclists than Amsterdam. Your city card will cover the cost of the bicycle rental, making it the perfect add-on to your vacation, You can cycle through the city centre and discover its unique architecture and quaint little cafes.

Amsterdam is home to some of Europe’s best museums. The Rijksmuseum is one of the most recognisable sites in the Netherlands. It’s a natural treasure that showcases over 800 years of Dutch history. You can even view fashion pieces from designers like Yves Saint Laurent. The building itself is visually stunning and opened in 1885. It underwent renovations in the early 2000s and reopened against in 2013. You can access this museum for free with your city card.

The Van Gogh Museum pays tribute to the greatest Dutch painter to ever live. It houses the largest collection of works by Van Gogh, including his letters and drawings. This museum is also part of the city card program.

The home that Anne Frank hid in for two years during World War Two welcomes thousands of visitors every year. It’s been converted into a museum which has her original diary on display. You can view historical documents, photographs and film images that show the events captured by her diary.

The canals are at the heart of Amsterdam. There are several canal cruises that you can take which off hop-on-hop-off sightseeing tours. Some of these tour services accept the city card program, and they are the perfect way to explore Amsterdam.

Is a European trip complete without a visit to a palace? You can visit the Royal Palace at certain times of the year. You can take an audio guided tour around the palace and explore the paintings and sculptures, as well as the state banqueting halls. You’ll be captivated by the history on display, dating back to Louis Napoleon, the first King of Holland. At the Royal Palace, you can get up close and personal with the country’s history and some of its most impressive artifacts.

How many days should you stay in Amsterdam?

Amsterdam is one of the most tourist-friendly cities in Europe. It’s the perfect place to visit on a three- or four-day vacation, and it would fit in nicely with a visit to paris or london. Make sure to pick up a City Card so that you can have all your public transportation and most of your tourist sites paid for in advance. You’ll fall in love with Amsterdam and want to visit it more than once. Don’t miss out the opportunity to travel through the city on a bike and explore its hidden streets. Amsterdam is a city often missed by American tourists, but I think it should be top of your bucket list!

Are you traveling to Arlington, Va? Here are...

15 safest countries to travel alone as a...