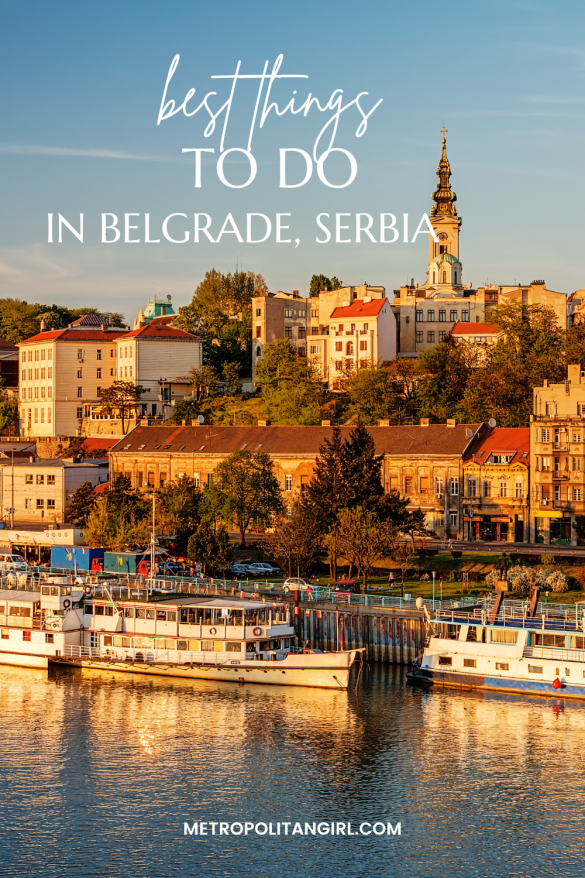 If you’re looking for best things to do in Belgrade, you’ve come to the right place! Belgrade is known to be one of the most cheapest travel destinations in Europe.   There’s something for everyone in this vibrant city, from exploring the many museums and historical landmarks to enjoying the nightlife and delicious food. Whether you’re a history buff, a foodie, or just looking for a good time, you’ll find what you’re looking for in Belgrade.

Top Things to do In Belgrade, Serbia

Kalemegdan Park is one of the most popular public spaces in Belgrade, occupying a prominent hilltop overlooking the Sava and Danube Rivers. It is an ideal place to relax, enjoy panoramic views of the city, and observe the many historical monuments and museum structures that reside within the park.

The Nikola Tesla Museum is one of the top things to do in Belgrade, Serbia. The museum is dedicated to the life and work of Nikola Tesla, one of the most important inventors of the 20th century. The museum houses a large collection of Tesla’s personal belongings, as well as a library and archive of his work. Visitors can learn about Tesla’s life and work, and see some of his most famous inventions, including the Tesla coil. The museum is a must-see for anyone interested in the history of science and technology.

Skadarlija is a charming cobblestone street in the heart of Belgrade, Serbia. It is lined with quaint cafes and restaurants, and is a popular spot for locals and tourists alike. Skadarlija is a great place to people watch, enjoy some traditional Serbian cuisine, and take in the sights and sounds of the city. It is definitely one of the top things to do in Belgrade!

Saint Sava Temple is a unique combination of church, mosque and synagogue. The temple was built in the early 13th century and is one of the largest Orthodox churches in the world. The interior of the church is decorated with beautiful frescoes and icons. The temple is open to the public and is definitely worth a visit.

The Belgrade Fortress is one of the best things to do in Serbia. The fortress is a complex of buildings and structures that have been standing for centuries. The fortress has many different rooms and chambers to explore, and it is also home to a museum. The Belgrade Fortress is a great place to learn about the history of Serbia and to see some of the country’s most impressive architecture.

Knez Mihailova Street is one of the best places to go shopping in Belgrade. The street is lined with a number of shops and boutiques, as well as cafes and restaurants. You can find everything from clothes to souvenirs on Knez Mihailova Street, and it’s a great place to people watch as well.

Republic square is located in the center of the city of Belgrade and is home to many of the city’s most important landmarks. The square is bordered by some of the city’s most famous streets, including Knez Mihailova Street, the main pedestrian street in the city. It is also home to the Serbian National Theatre, the National Museum of Serbia, and the Serbian Academy of Sciences and Arts. Visitors to the square can enjoy a variety of activities, including shopping, dining, and sightseeing. It is also  a popular spot for events and festivals, making it a must-see for any traveler who wants to immerse  in Serbian culture.

If you’re looking to immerse yourself in the local Serbian culture doing a walking tour is a must. I recommend Alternative Serbia. They offer a variety of tours, including a food  and drink tour and walking tour.   I got to experience some of the best  tourist attractions, tried some traditional Serbian food and drinks and  and learnt  about the city from a local guide.

11. National Assembly of the Republic of Serbia

Mount Avala is  breathtaking mountain offers stunning views of the city and the surrounding area, and is a great place to hike or take a cable car up to the top. There are also many restaurants and cafes at the top of the mountain, making it the perfect place to relax and take in the scenery.

The Victor Monument is one of the most iconic monuments in Belgrade. The monument was erected in 1928 to commemorate the victory of the Serbian army in the First World War.  Conveniently located near the city center, it is also a popular spot for tourists to take photos.  While strolling around, you will encounter  locals socializing and relaxing.

When in Belgrade, don’t miss the National Museum of Serbia! One of the best things to do in the city, this museum is home to a wide range of historical artifacts and artworks. From ancient pottery to modern paintings, there’s something for everyone at the National Museum of Serbia. Make sure to allow some time to explore the museum’s grounds, too. The building itself is quite beautiful, and the gardens are perfect for a leisurely stroll.

Zemun is a historic town located in the southwestern corner of Serbia. It is situated on the confluence of the Danube and Sava rivers and is known for its 18th- and 19th-century architecture. The town was occupied by the Austro-Hungarians in the 18th century and became part of Serbia in 1918.

Explore the Old Town, visit the Zemun Cemetery, and taking a ride on the Zemun Funicular. The Old Town is a UNESCO World Heritage Site and is full of historic buildings and landmarks.

While visiting  Zemun,  be sure to check out  Gardoš Tower for a panoramic view of Belgrade.  It is located in Zemun, on the banks of the Danube river. The tower was built in the 14th century and is one of the oldest buildings in the city. It is a symbol of the city’s history and culture. Visitors can climb to the top of the tower for a panoramic view of the city. The tower is also home to a museum, which tells the story of the city’s past.

This beautiful church is one of the most important religious sites in the country, and its history dates back centuries. Today, the church is a popular tourist destination, and visitors can explore its stunning interior and learn about its fascinating past. If you’re interested in Serbian culture and history, a visit to St. Mark’s Church is a must.

Looking for something super to unique to see in Belgrade? Hotel Moska is a must see for tourists. This beautiful hotel is located in the heart of the city close to many tourist attractions.  It was mansion built in 1908 and  designed by Nikolai Strukov, a Russian artist and architect. Celebrities, such as Albert Einstein, Alfred Hitchcock and Robert De Niro have stayed in the Moska hotel. Be sure to stop by the hotel restaurant to enjoy the highly rated cuisine.

Is Belgrade Serbia safe for tourist?

In general, yes. Violent crime is relatively rare, and most visitors will not experience any problems during their stay. However, there are a few things to be aware of. Pickpocketing is common in busy areas such as tourist attractions and public transport hubs, so keep your belongings close to you at all times. There have also been reports of scams involving fake taxi drivers, so it’s best to use a reputable company when getting around. Overall, as long as you take basic precautions, you should have a safe and enjoyable visit to Serbia.

Why should you visit Belgrade, Serbia?

No matter what time of year you visit, there is always something to do in Belgrade. If you want to explore the city and its history, there are plenty of museums and galleries to visit. If you want to experience the nightlife, there are clubs and bars open until the early hours of the morning. And if you just want to relax, there are plenty of parks and green spaces to enjoy. So what are you waiting for? Book your ticket to Belgrade today!

13 safest Places In The USA For Solo Female Travelers

Are you traveling to Arlington, Va? Here...

London Travel Guide; things to do, where...